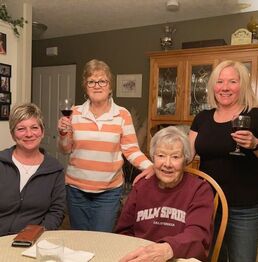 Beth passed away October 18, 2022 with her family by her side. Beth was born in Dinsmore, Saskatchewan, the oldest of 9 children. Her & Frank were married from 1955-1974-spending their years together in Alberta & Saskatchewan. Beth did re-marry which eventually landed her on Vancouver Island. She lived in Victoria from 1986-2006. In 2006, she moved up to Campbell River.

Beth spent her entire working career in banking—she missed working once she was retired but she always kept busy, for years she was on the strata council for her condo complex. She also volunteered at the hospital gift shop for the last 14 years.

Beth was known to many sports teams as the grandma that was always there cheering on her grandchildren and their team. She was also known for always being so sharp, fit & “not looking her age”—she will be missed dearly by her family.

Beth was predeceased by both her parents as well as siblings Gord, Bernice, Carol & Clarence.

She is survived by her sisters Linda and Helen and brothers Les and Ken as well as son Greg Lecky (& Linda) of Shawnigan Lake, daughter Carole Kommnick (& Steve) of Campbell River as well as grandchildren Jenelle, Derek, Ryan & Dayton and great grandchildren Aliyah, Cohen, Bennett & Isla.

In lieu of flowers the family would like to suggest a donation in Beth’s memory to the Heart & Stroke Foundation.

A Celebration of life for Beth will be held at a later date, please e-mail to the following address: bethirvinememorial@gmail.com if you would like to be contacted regarding details of her Celebration of Life.