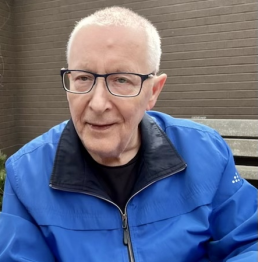 Richard “Dick” McManus, passed away peacefully at his home, surrounded by his loving family. He was 79 years young, and despite his Parkinson’s Disease, lived life to the fullest. Dick was an avid traveler, who loved the outdoors, and never shied away from adventure.

Dick was passionate about his career, whether he was serving as a peace keeper for the UN or working at ADSS as a Humanities teacher. Later in his career, he traveled to San Diego State University to obtain his Masters in Counseling and became an elementary school counselor for School District 70 in Port Alberni.

Dick treated everyone like family, and no one was a stranger to him. He was often the go to in his neighborhood for lost dogs; he was famous for knowing which dog belonged to which owner.

He was an amazing father and husband. His wife Peggy, and two daughters, Joni (Shawn) and Chris (Glenn) will miss him terribly. Although Parkinson’s disease took his whistle and the skip in his step, he remained a kind, warm and loving man, with a great sense of humor.

As he always said in farewell, and we now say to him, God Bless.