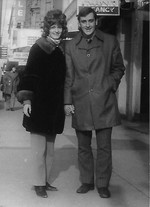 Bob Mummery, age 72, passed away peacefully at home in Victoria, BC on June 4, 2019 with his beloved family by his side.

Bob was born in Brandon, MB May 4, 1947 and within a few weeks was adopted by Mel and Ivy Mummery of Minnedosa where he spent his first 18 years, leaving school in 1965. Bob worked in Winnipeg for Manitoba Hydro until the spring of 1966 when he’d had enough cold winters and stuck out his thumb and headed for Vancouver. Bob found work in a pulp mill on Vancouver Island through early 1967 and then moved to Hawaii for a few months. Bob spent the summer of 1967 in San Francisco and then headed back to Minnedosa to finish high school, arriving back home wearing a beard, beads and a serape which did not go over well with Mel and Ivy. In the summer of 1968, Bob moved to Los Angeles and attended Bryans College of Court Reporting, returning to Minnedosa in 1969 to marry his best friend Joyce Paler on July 22. The newlyweds headed back to Los Angeles where Bob finished his final year of college and then relocated to BC where he accepted a job in the County Court of Vancouver. September of 1970, they welcomed their son Gary who was born back home in Minnedosa on holiday. In 1972 Bob was promoted to Regional Court Reporter for northern BC and moved to Prince George. While there they welcomed their daughter Jennifer who was born in May of 1973. One of the highlights of his early life was spending two days at sea on the Canadian Destroyer HMCS Yukon with his cousin who was stationed on board. That experience stamped him a Navy man for life. In 1975 he transferred to the supreme court of Alberta and relocated to St. Albert.

Bobs love of photography began to develop and in 1978 he left court reporting in search of a way to turn his hobby into an income and purchased a camera store in Edmonton. 97 Street Camera eventually led to him becoming the official photographer at Edmonton International Speedway. In 1979 the Edmonton Oilers joined the NHL and shortly after in 1980 Bob was approached to become their official photographer. Bob spent 9 years with the Oilers and became the personal photographer for Wayne Gretzky and did most of his professional promotional work. Bob was an integral part of the Oilers organization and was honoured to receive 4 Stanley Cup rings along with the team and published 2 books on hockey, The Amazing Oilers in 1982 and Fuhr on Goaltending in 1988. Bob was also commissioned by the City of Edmonton to produce a private book on Gretzky’s career as a gift from the city to Wayne on the commemoration of a statue of him placed at the entrance to the Edmonton Coliseum. Having met several members of the Snowbirds team during this time, Bob spent the 1983 season flying with the snowbirds and produced a promotional book on their behalf for souvenir sales. During his 9 years with the Oilers Bob was also contracted as a photographer by the Calgary Flames; and Sports Illustrated, Time, Life and Hockey News called on a continuous basis for his photos to fill their pages. In 1989, with the Oilers out of the playoffs the Calgary Flames contracted Bob to do their 10th Anniversary book and as serendipity would have it, they won the Stanley Cup that year. The book became a triple print and instant sell out and was a great way for Bob to exit the National Hockey League.

The summer of 1989 Bob received job offers from both the Los Angeles Kings and the Calgary Flames, but instead chose to follow his instincts switching gears once again and relocated his family back to Minnedosa, purchasing The Minnedosa Tribune. Bob and Joyce operated the newspaper for the next 17 years and it became a family affair working alongside son Gary, daughter Jennifer, sister Peggy and his father Mel for many of those years. During this time with the Minnedosa Tribune, Bob published 3 books all involving Minnedosa History. Tanner’s Crossing; the early history of Minnedosa, Hold Back the Dam; documenting the collapse of the Minnedosa Spillway and Trails to Rails; the railroading history of Minnedosa. All funds from all three books totalling over $70,000 was donated to the Heritage Village, The Heritage Walking Trail, the Bison Compound, the Archives and Save the Station. He often said the most satisfying experience of his life was writing about the railroad history and the massive amount of material that people so willingly volunteered. Bob grew up in the 50s in the railroad community in a railroad family and recognized and remembered most of those hard-working men who somehow raised their families making pennies an hour. He was proud of that part of his heritage. Bob was a dedicated volunteer and worked endlessly to get many projects started and completed within the town. Some of the projects he was heavily involved in were The Heritage Foundation, The Heritage Walking Trail, Buffalo Compound, Lake Rehabilitation, Lions Lookout Tower, Heritage Village, Rotary Swinging Bridge, Community Hall, Library Expansion and Archives and Save the Station among many others. It was his opportunity to give back to his community and firmly believed that decisions are made by those who show up - and show up and give back he did.

In 2006 Bob and Joyce sold the Tribune, retired and began spending the next 6 winters in his beloved south west Arizona. For the past 7 years Bob and Joyce have enjoyed their life, living close to family on Vancouver Island, BC where Bob inspired by his daughter found his next calling as an Artist. Beachcombing and creating driftwood art soon led to searching for the most unique items which he turned in to Steampunk clocks, a lantern, a camera, and a steampunk guitar. Bob was a natural and was twice juried in to the Island’s premier summer arts event, the Sooke Fine Arts Show. He was most proud when both father and daughter were selected to display their art in the same show in 2016. Spending his final years on Vancouver Island Bob said was the best decision they could have ever made. Bob had a long-standing love for the ocean and the beauty of the BC coast.

At Bobs request, he will be cremated and laid to rest in a private family ceremony on our mountainside overlooking the Strait of Juan de Fuca.