To share your memory on the wall of Garth Lapp, sign in using one of the following options:

Provide comfort for the family by sending flowers or planting a tree in memory of Garth Lapp.

Provide comfort for the family of Garth Lapp with a meaningful gesture of sympathy.

Returning to Victoria in 1957, Garth opened one of the first television repair businesses in Victoria, Ace TV, which he successfully owned and operated until 1976. After selling the business, Garth obtained his Class 1 license and pursued a life long ambition to become a long haul trucker, eventually retiring in 2002. Garth had a lifetime of involvement with cars and motorcycles, and was a longtime member of the Victoria Motorcycle Club where he won several events which he participated in. He raced in various different events, and would travel to both the US and the interior of BC to compete.

Garth is predeceased by his wife Ina of 42 years, sisters Judy and Dianne. He is survived by his second wife Caroline of 23 years, sons John, Richard, Michael, and stepdaughter Tammie. Grandchildren Jenna, Ryan and Teri, and great grandchildren Evan, Jacob, Charlotte and Scarlett.

Receive notifications about information and event scheduling for Garth 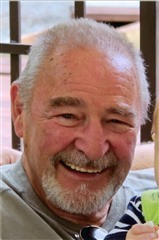 The insignias listed here may be subject to copyright and/or trademarked. Those copyrights and trademarks are owned by the respective organizations.

We encourage you to share any memorable photos or stories about Garth. All tributes placed on and purchased through this memorial website will remain on in perpetuity for generations.

My apologies for omitting Tammie from my previous message. Condolences also to the grandchildren and great grandchildren.

My condolences go out to Garth's family. Cousin Garth and I had a number of conversations, especially over the past few years. I enjoyed his company in person and over the phone. He and I shared our regret that our family hasn't spent a great deal of time together over the years, like some families do. I hope that we can all get together in the coming months to raise a glass to Garth. In the meantime, my condolences go out to Caroline, John, Richard, Michael and the entire Lapp family.